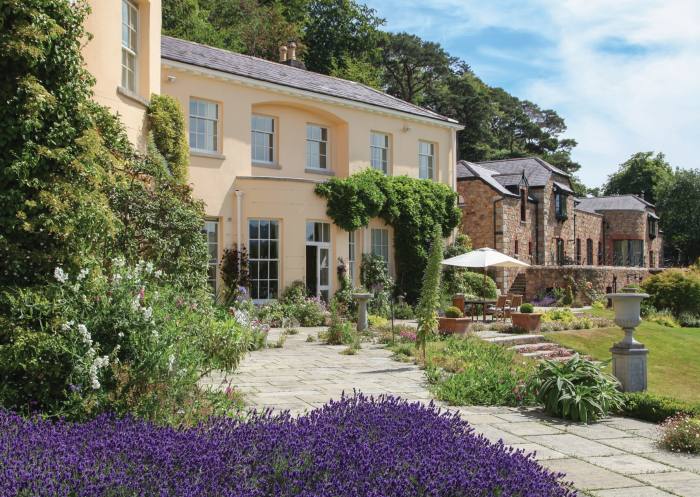 Where On Howth Head, a peninsula north-east of central Dublin. The city’s international airport is 25-30 minutes away by car.

What A three-storey, seven-bedroom Regency villa built in 1820. The house retains its original doors, windows and plasterwork, as well as a domed, stained glass rooflight above the staircase. A 300-metre-long garden, lined with stone walls, has potential for further design.

Why The romantic location: the house is perched on the cliff road that rises from the pretty fishing village of Howth, and has panoramic views of the bay, harbour and rugged coastline.

Where In the foothills of the Wicklow Mountains, 30-40 minutes by car south of Dublin airport.

What A late-Georgian house with eight bedrooms, a guest lodge and an indoor leisure complex with a pool, cinema, games room and music studio. The property is on 27 acres with mature trees, terraces, stables and outbuildings.

Why The house was restored in the 1990s (its then owner was the musician Chris de Burgh) to incorporate sympathetic interiors with modern amenities.

Where In the village of Killawalla, or Killavally, 12km inland from Westport, a popular town on the west coast. Ireland West airport in Knock, which operates flights to the UK and mainland Europe, is about 50 minutes’ drive away.

What A two-bedroom, two-bathroom thatched cottage with just over 100 sq m of living space. The property has been extended and refurbished, and includes a mini-cottage with potential as a home office or studio.

Why The Wild Atlantic Way, a touring trail that runs along the whole west coast from northern Donegal to southern County Cork, can be joined at Westport, along with the Great Western Greenway, a 44km cycling route that follows the old railway line through Mayo.

Where Near the towns of Newbridge and Kildare, 54km south-west of Dublin. Dublin airport is about 45 minutes by car.

What A 19th-century main house and separate cottage on an 8-acre estate with equestrian facilities (currently let) including 40 stables, grazing area, barn and stores.

Why The surrounding area has been associated with horseracing and breeding for centuries. The Curragh Racecourse is five minutes away; the Irish National Stud, with its Japanese gardens, 10 minutes.

Where On the Beara Peninsula, on the north side of Bantry Bay in the south-west. The market town of Bantry is 15 minutes away by car; Cork and Kerry airports are both within a 90-minute drive.

What A 35-acre estate including two islands, a private beach and a five-bedroom, four-bathroom house built in 1935. The grounds are largely woodland and the house has views over the treetops towards the bay and islands.

Why Previous owners include the actress Maureen O’Hara, who lived here for more than 30 years. The sheltered spot, on the water and surrounded by hills, offers the combination of direct harbour access and complete privacy.