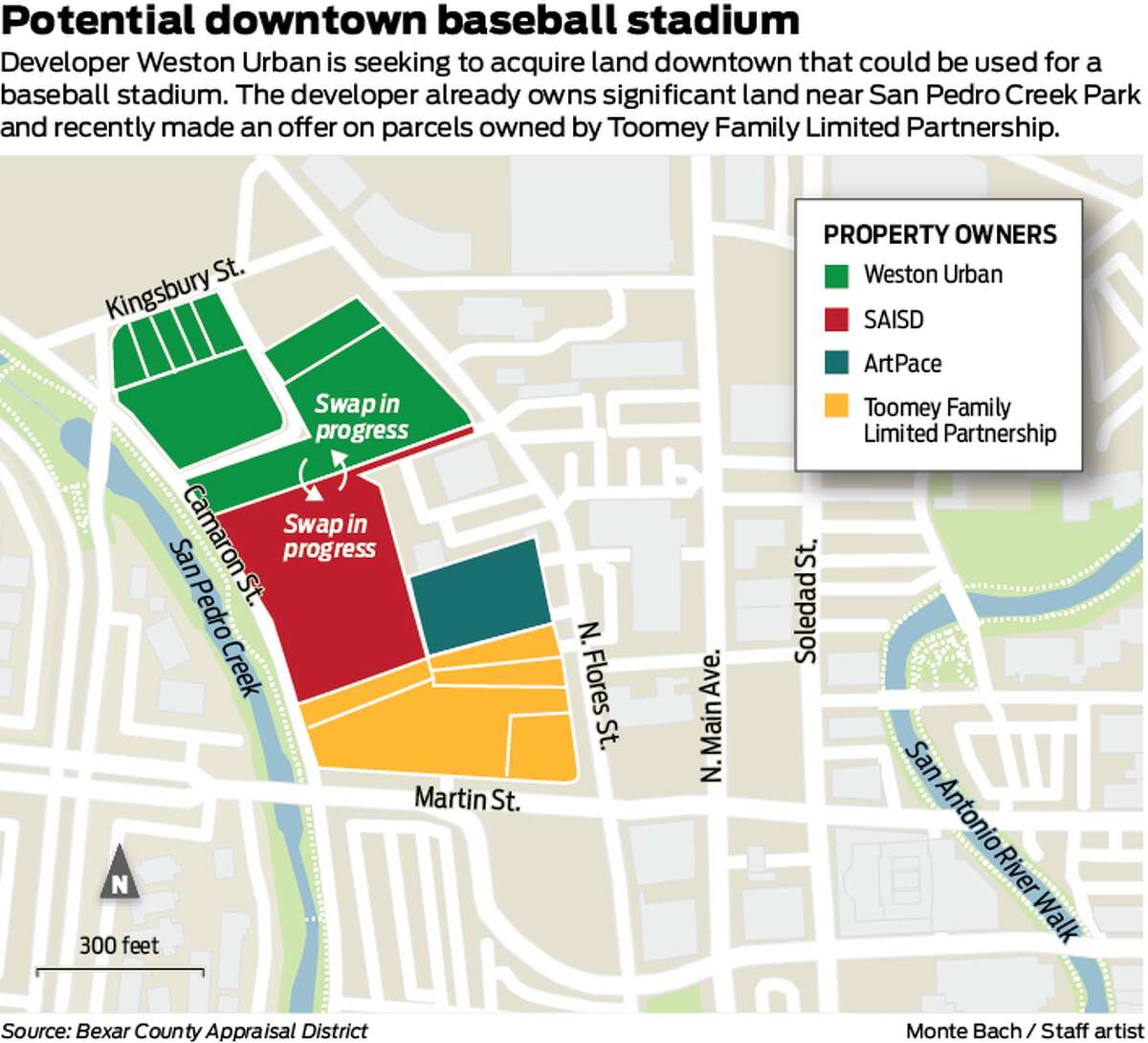 Developer Weston Urban is attempting to acquire property near San Pedro Creek for construction of a downtown baseball stadium.

The idea of such a ballpark has been kicked around for years, but Bexar County Judge Nelson Wolff said the current effort is promising.

“These are a group of prominent business people that have the wherewithal to make it happen,” Wolff said, declining to identify those involved.

The parcel, which is across from the Soap Factory Apartments, includes the former Alamo Downtown Automotive dealership and empty lots.

The family is not interested in selling, at least for now. The land’s value has risen and “it’s going to keep going up,” Toomey said. The Bexar Appraisal District values it at $6.5 million.

The nonprofit is not seeking to sell its property, which includes a parking lot and workshop, the Heron reported. Artpace did not immediately respond to an inquiry from the Express-News.

The district is trading its property for 2.2 adjacent acres owned by Weston Urban. Its board of trustees approved the swap in March.

Graham Weston and Randy Smith, co-founders of Weston Urban, did not immediately respond to inquiries.

The properties are close to the northern portion of the creek, the first section to be transformed from a ditch into the linear San Pedro Creek Culture Park with walking paths and art.

The prospect of a baseball stadium in San Antonio’s urban core is not new — there have been attempts to find a location for years.

A study commissioned by the city in 2016 identified the area around Fox Tech and Weston Urban’s nearby land as possibilities. Other options included a parking lot near the Alamodome, the Institute of Texan Cultures and the University of Texas at San Antonio’s downtown campus.

But some of that property has since been developed, with UTSA expanding its campus and SAISD constructing its new headquarters. UTSA is currently seeking input on options for the future of the institute, which could include moving it to another part of the city.

Land near the San Antonio Museum of Art, in Government Hill near Pearl, and near Lone Star south of downtown has also been floated in the past.

“There’s been a lot of false starts that didn’t pan out,” Wolff said.

On ExpressNews.com: With 32-story high-rise, Weston Urban is making a big bet on demand for downtown San Antonio housing

Weston and his associates have previously discussed a ballpark with city and county officials as part of a broader conversation about rejuvenating downtown.

“It is a missed opportunity to not have sports downtown,” Weston said in 2012.

Still, “there’s zero chance I will build a stadium,” he added. “I am a believer of baseball downtown, and there are areas of opportunity. But I’ll likely build housing and other things that would go around a stadium.”

In 2017, Smith said Weston Urban had been approached many times over the years about constructing a ballpark.

“From where I sit today, it looks like there’s more than a few things that would need to happen for a downtown ballpark to be a reality on any of our properties,” Smith said then. “I’m not actively working on any of those things. We are laser-focused on Frost Tower and our historic assets at the moment.”

Weston Urban has renovated buildings on Houston and Flores streets with office space for technology startups and retail.

In 2019, it completed the Frost Tower, which was the first new office tower downtown since 1989.

The building was constructed as part of a public-private partnership between Weston Urban, Frost Bank and the city. As part of the deal, the city and Frost sold about 9 acres downtown to the firm, including the Municipal Plaza Building. Weston Urban opened a public park on a slice of that land in 2020.

Currently, the firm is building a 32-story residential building with about 354 apartments and ground-floor retail at North Main Avenue and East Travis Street.

The firm plans to turn a block bounded by the creek and Commerce, Dolorosa and Laredo streets into a mixed-use development. It would renovate the Arana and Continental Hotel buildings and construct a 15-story building with about 255 units between the two buildings.

Wolff said a stadium along the revitalized creek would be attractive and could host events beyond baseball games.

“We’ve put a lot of money into San Pedro Creek,” he said. “The creek’s really buzzing with a lot of activity. It would be great to see a ballpark on it.”

More housing has been built in and around downtown in recent years and residents could walk or bike to the stadium, which could bring more foot traffic to the area and limit parking needs, Wolff said.

The Link, a proposed quarter-mile park that would connect San Pedro Creek Culture Park with the San Antonio River Walk, would run through the area where Weston Urban wants to purchase property.

The Link would begin at the river, near Convent Park, extend west along the Savings Street right of way and across Soledad, Main and Flores to Camaron near the creek.

There have been conversations between the group of business leaders and the Missions, the Double-A affiliate of the San Diego Padres, but Wolff said he has not been privy to them.

A spokesperson for the team, which plays at Wolff Stadium, did not immediately respond to an inquiry. Spokespeople said the city and county have not been approached about the stadium.

County Commissioner Tommy Calvert, an advocate of The Link, said in a statement he would oppose public funding for such a project.

“Spending taxpayer dollars on a minor league sports stadium does not make sense when there are so many more pressing issues at the family kitchen table,” Calvert said. “People are concerned with the high prices of gas, food, public safety, and housing. There is no support from property owners for a stadium, and there are other places to build a stadium in Bexar County.”

“The only logical project to finish San Antonio’s historic River Walk is The Link, which advances and enhances the River Walk and truly reflects our community’s broader vision,” he added.

Trish DeBerry, the Republican nominee for county judge and a former county commissioner, said she was not aware of the latest search for a stadium location.

DeBerry said revitalizing downtown is important and that she’d be open to discussing potential opportunities should she be elected.

But, she added, “In a post-COVID environment, the priorities really have to be focused on working families, taxpayer relief, inflation, gas prices … all the things that have made it difficult to make ends meet.”

Wolff said he had not heard a legitimate estimate of costs for such a project. The city and county could potentially be involved, he said.

“Who knows — it may go, it may not, but there is a group trying,” Wolff said.